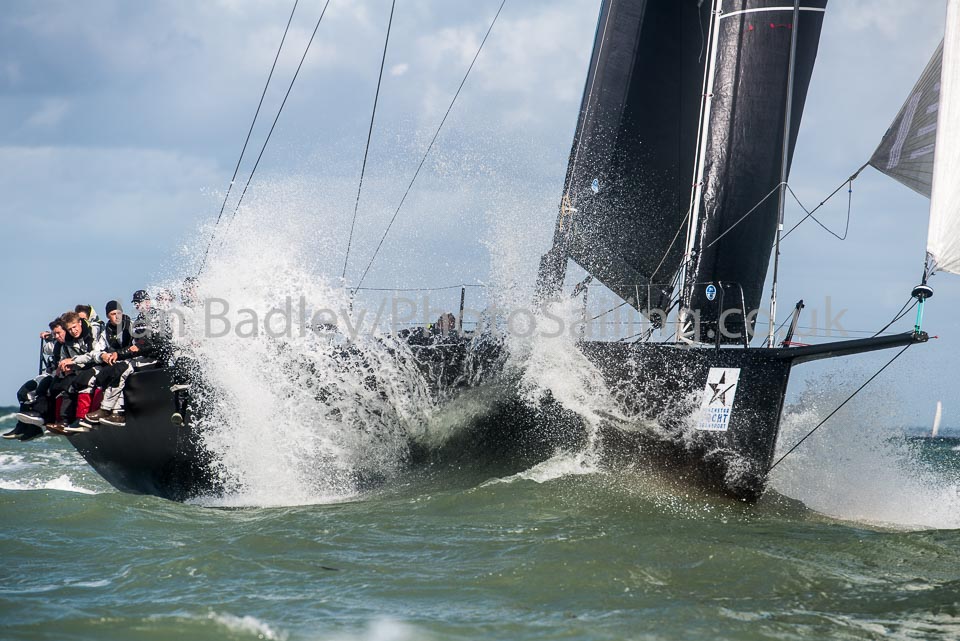 'Veruna' en-route to winning the Sevenstar Round Britain and Ireland Race
25/08/2014
It has been a busy year so far. As well as the sailing photography, landscape photography and running my workshops, every other spare working moment seems to have been spent on this new website! It is a tad like the Forth Road Bridge in that the ongoing nature of the business demands constant revision and amendment, but this current evolution required a total change.
Back to the sailing. My first real event this year was the bi annual Pendennis Cup regatta in Falmouth. I have been covering this event for superyachts since 2010 and the wonderful scenery provide a fantastic backdrop to these leviathan yachts. Yachting World provided editorial coverage of the event, featuring one of my images as a double page spread for the article opening shot, plus a selection of other images of mine including the head on view of the mammoth ‘Christopher’, a 46mtr ketch over two pages.

The following month saw the annual JP Morgan Round the Island race take place. The record for this circumnavigation of the Isle of Wight was broken last year by Sir Ben Ainslie in a time of 2 hours, 52 minutes and 15 seconds, an amazing time. This year however recorded the slowest winning time of hours 51 minutes 37 seconds, and that in a foiling catamaran! You may have guessed, there was little or no wind this year.

I was in my chartered boat off the Needles and a large number of the fleet were sailing (if that’s the right term) backwards for some of the time and all the yachts had flogging sails. One of my candid images of the winning yacht was featured in the Yachting World article, plus another featuring the forthcoming Aberdeen Asset management Cowes Week.
In July, it was to Cowes for a week covering the Panerai British Classic Week, an annual event featuring a myriad of classic yachts of all shapes and sizes. Most of this was for my own collection of soon to be released images, including some of my favourites, the 8 Metres.

Early August was the date for this year’s Cowes Week Regatta. To me, numbers seemed down but there were still over 8,000 competitors taking part. Highlights for me were the start of the Artemis Round the Island Challenge, with Zara Phillips helming the title yacht; the fabulously competitive X One Design keel boats and the antics on the Tursday of the yachts while the AP flag (postponement) was flying. This included diving competitions and even wake boarding behind a motoring yacht, using the floorboards of the yacht!

The Sunday after Cowes Week was due to be the start of the Sevenstar Round Britain and Ireland race, but at the 11th hour, the race was postponed until the Monday due to violent winds and seas as the remains of Hurricane Bertha made its way across the UK. At 8:00 am on the Monday, a fellow photo journalist and I made our way down Southampton water in our chartered RIB to cover the start. Winds had not abated much, they were still blowing Force 7-8 with gusts into the 40 knots and a rough sea state, but the race was on.

It was tough photographing in the bouncing RIB, even though it was a 30 foot long workboat RIB. The usual Solent chop didn’t help with its short fetch and cross currents causing mayhem for us. The downwind starts were fast, very fast. At one point we ran alongside the eventual first back yacht Musandam – Oman Sail doing 37 Knots! It was an amazing experience and sight, that’s for sure. Apparently, she touched 43 knots at one point during the starting leg.

We ran along with different yachts up to Chichester, capturing some great action shots of the eventual winner on handipcap, Veruna. Oman Sail by the way, reached the finish having travelled the 1800 mile course round the outside of Great Britain and Ireland, after just 3 days, 3 hours and 32 minutes, setting a new World Record in the process.
My next events are both in the Mediterranean - a report soon.